To share your memory on the wall of Robert Fortunato, sign in using one of the following options:

Rob had many friends that he loved to spend quality time with. They would often attend Pearl Jam concerts together. When he was younger Rob enjoyed bonding with his father while fishing at Grass Island. Rob was a compassionate, loving, and caring person who always put others above himself. He found true joy in making others happy, whether it be orchestrating family trips or bringing family and friends together for a cookout. Rob always manned the grill and was affectionately known as the “grill master”. Rob was also a sports fanatic. His favorite teams were the Mets, Rangers, and especially the Eagles. Even though his teams often disappointed him, he always found himself cheering them on. He was extremely proud of his position as a Audi Brand Specialist at Audi of Fairfield. Rob was a kind soul gone too soon. He will be missed and loved dearly by his family and friends.
Fly high Rob!

Services will be private.
Read Less

To send flowers to the family or plant a tree in memory of Robert Paul Fortunato Jr., please visit our Heartfelt Sympathies Store.

We encourage you to share your most beloved memories of Robert here, so that the family and other loved ones can always see it. You can upload cherished photographs, or share your favorite stories, and can even comment on those shared by others.

Jeff Abella purchased the The FTD Sleep in Peace Wreath for the family of Robert Fortunato. Send Flowers 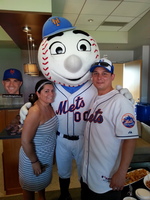